IT WAS BACK to the Vale of Belvoir, the Beautiful View’ to run on the towpath of the Grantham Canal this Saturday, for the first time in a few years actually and I had forgotten just how striking it is in that scenic area that sits astride the three counties of Nottinghamshire, Lincolnshire and Leicestershire.

My leisurely mid-morning drive took me over the River Trent via stately Gunthorpe Bridge, passing through the attractive market town of Bingham and on to pretty Redmile. Soon, the impressive sight of Belvoir Castle came into view standing over a hazy hinterland, gently bathed in hazy early September sunshine. 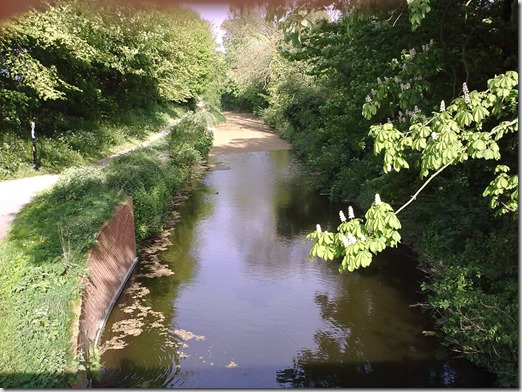 The Vale of Belvoir has always been a popular choice for a some out-of-town relaxation for me, being only a modest forty-five minute drive from my Nottinghamshire home. I love it because it is under-populated by visitors and all the more peaceful for it. I have to say some do not know what they are missing as it is an impressive slice of countryside, all the better for having the atmospheric Grantham Canal running through it, a thirty-three mile ribbon beginning in Nottingham and ending in the Lincolnshire town it was named after.

Meeting my friend outside the Rutland Arms, better known as ‘The Dirty Duck’, near Woolsthorpe-by-Belvoir. I parked up canal side and noted how much the reeds had colonised the water since I had last visited. There were few people around at the adjacent camp site providing a peaceful and serene scene. 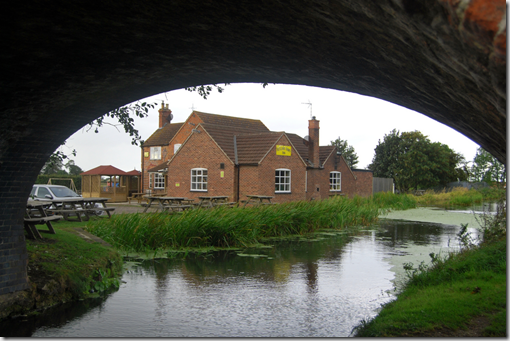 The Rutland Arms on the Grantham Canal

A seven-mile run took us alongside the old waterway, punctuated only by the odd walker, cyclist or angler on it’s quiet banks. The run took us down to Harlaxton Drift Bridge and a return to The Rutland Arms passing locks and ancient turning circles for the canal barges.

Afterwards, it was time for lunch and with the Rutland Arms’ doors firmly closed it was a mile drive down the quiet road to the village and the welcome of the superb Chequers Inn at Woolsthorpe. It’s hard to imagine a much more impressive pub-restaurant environment than this beautiful and historic 17th-century inn with it’s stone fireplaces, bar and rabbit warren of attractive and well-appointed rooms. A restaurant/banqueting suite had evidently been extended on to the old building earlier this year adjacent to the attractive garden where we had our lunch in the sunshine, accompanied by the pub’s friendly resident rooster which patrolled the garden.

All good things come to an end so they say and my regular Saturday runs at Woodborough in Nottinghamshire are no longer, at least for now. After a moderate and pleasant drive through the neighbouring counties though, back to The Vale of Belvoir offers an outstanding replacement.

So here we are bar the shouting. The sixth and final stage of the Grantham Canal Walk. The day’s walking began late as we waited upon the passing of a hugely stormy sky and torrential rain. We finally alighted from the car at The Dirty Duck at Woolsthorpe and set on our way to the final destination of Grantham. All good things come to an end as they say but we look forward to walking the Grantham Canal again one day…

It was with a little sadness that we contemplated the final stage of our Grantham Canal walk before we set out today. The walk has been so enjoyable and interesting and perhaps there was a small feeling that we didn’t want it to end. The five previous walks seem to have flashed past and yet the first day we set foot on the canal from near Lady Bay Bridge in Nottingham in the sunshine seems some time ago now.

Three walkers were present today, Barbara, Mel and Stu. The plan was to meet later than the customary morning rendezvous, at 4pm at Grantham Train Station, deposit a car and drive back to The Dirty Duck by Woolsthorpe. Upon arriving in Grantham town centre we were greeted by an inky black sky complete with lightning and heavy rain threatening.

END_OF_DOCUMENT_TOKEN_TO_BE_REPLACED

Stage four of the Grantham Canal Walk begins at Harby and follows the ancient waterway to the picturesque and popular village of Redmile.

Four go ‘fourth’ – that’s the fourth section of the Grantham Canal Walk on a stroll which almost didn’t happen due to wet weather. After a series of phone calls discussing various problems including a lack of the two cars necessary on the day to carry out our linear walking routine, we finally awoke in the morning to pouring rain. A quick rain check confirmed that we should postpone today’s walk. An hour later the show was back on as the heavens cleared enough for us to go for the Harby to Redmile section.

Four walkers today then, Mel, Barbara, Stu and Gino Dog! Gino came along to protect us from any killer rabbits along the canal. Gino enjoyed himself immensely sniffing, exploring and even in the early stages taking a dip in the canal – from which he had to be pulled out of!
We began today’s walk at Harby Mill Bridge, the point we had left the canal the previous week. The afternoon was now a surprisingly warm one with clear skies and the foliage around us drying in the sunshine. The early stages were characterised by little in the way of views due to the high hedgerow on one side and the very tall reeds clogging the canal. At times the canal could not be seen at all. END_OF_DOCUMENT_TOKEN_TO_BE_REPLACED

Further on along the Grantham Canal see’s today’s walk take us from Kinoulton to the historic village of Harby. The route passes through the charming Hickling Basin.

Hey-ho, let’s go! It’s off and strolling with stage three of the summer 2006 Grantham Canal walk! After last week’s brush with inclement weather there were no such problems this time on a fine and sunny day of around 24C. Starting earlier by necessity on this occasion, we left a car at Harby and duly backtracked cross country via Colston Basset to the pretty village of Kinoulton, scene of the conclusion of last week’s walk.

END_OF_DOCUMENT_TOKEN_TO_BE_REPLACED

The Grantham Canal Walk continues with the second stage between Cotgrave and the pretty village of Kinoulton in The Vale of Belvoir. Today’s walk features the sad tale of Vimy Ridge Farm.

The second stage of the walk commenced today in much cooler conditions than the previous occasion’s steamy, sapping and summer’s day. Indeed the weather forecast had been less than auspicious.

Barbara and I began by driving out to the day’s walk destination, the pretty Nottinghamshire village of Kinoulton and leaving a car for our eventual arrival later in the day. We then drove together to the now familiar point in Cotgrave from where we had left off from our summer sojourn one week ago. Skipping smartly up Hollygate Lane after a quick sandwich buying pause, we quickly retraced our steps from the previous stage and headed off cheerfully down the canal towards Fosse Bridge.

END_OF_DOCUMENT_TOKEN_TO_BE_REPLACED

Well the first stage got off to a successful start. Mel came along and the three of us decided to drop a car at the final destination for the day, Cotgrave, before catching a bus to Trent Bridge for a short walk to the beginning of the Grantham Canal at Trent Lock.

The first mishap was a Barry Chuckle look-alike careering down the centre isle of the chicaning city-bound bus before finding an agreeable soft landing on an attractive lady sitting in the seats near the front. To me-to you.

The first picture taken was taken from Trent Bridge of Nottingham Forest’s City Ground home before we set ourselves up for a shot at the beginning of the walk at Trent Lock, just behind Forest’s Brian Clough Stand. Eleven forty-five and off and walking the towpath we were. END_OF_DOCUMENT_TOKEN_TO_BE_REPLACED

Looking back on happy times, this series of stories documents the 33-mile walk in six stages that my friend, Barbara and I undertook in the summer of 2006. It’s a real pleasure looking back over those long incredibly hot days whilst this interesting project was undertaken. As the days begin to stretch and Spring beckons, join me now as I reminisce over the route from Trent Bridge at Nottingham to the walks end at Grantham in Lincolnshire.

During the early summer months of 2006, my friend Barbara and I began talking about the prospect of walking the entirety of the Grantham Canal which follows a meandering thirty-three mile route from the River Trent in Nottingham to its eventual destination in the Lincolnshire town of Grantham.

A long-distance walk having been of appeal to both of us, but as yet little deed, the old industrial coal barge route of the canal which enjoys a passage through a green corridor winding through the attractive Vale of Belvoir and no less than three counties, seemed an ideal journey to undertake as an initial project. The route appeared to offer tranquillity and interest, through the thoroughly well-named vale, and an ideal pastime for the summer which would offer a little achievement too.