I always had a real liking for the The Small Faces. In many ways they were the archetypal sixties Mod band. Unlike some bands of that era who followed the trend the group were Mods before the group was formed and carried their music, the clothes they wore and the attitude and sensibilities into the band. They were clearly authentic and their fans were aware of that.

I was reminded of them after watching a pre-recorded TV documentary about them recently. Is some ways it was sad to see a still-chirpy Steve Marriot being interviewed before his tragic death in a house fire in 1991 and bassist Ronnie Lane talking prior to his final capitulation to a crippling Multiple Sclerosis condition in 1997, some 16 years after his illness was diagnosed. The effervescence of the two and keyboard player Ian McLagan, who had replaced Jimmy Winston due to his ‘ego problems’ and drummer Kenney Jones shone through brightly and made the viewer understand their success and enduring appeal. They had fun playing their music, enjoyed their fame, and it showed.

The documentary was interesting for many reasons not least because it showcased how quickly fashions changed at that time of day. From a period of around ’65-’68 it showed the Small Faces appearing on the scene as the ultimate Mods, in their fashions and in some of their R & B-influenced pop. Like many other bands they began to experiment with music, finally recording 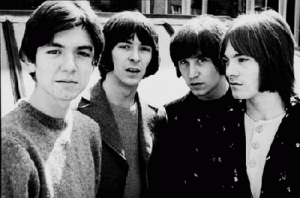 Ogden’s Nut Gone Flake which reflects its own era of psychedelia and concept albums. Even with that, the band’s charm and in particular Stevie and Ronnie’s vaudevillian nature are obvious and make the music and performance quirky, entertaining and interesting.

In 1965 their first single What’cha Gonna Do About It with it’s insistent R & B riff reached a chart position of 14. A string of 45’s followed including I’ve Got Mine, Sha La La La Lee, All or Nothing, Here Come’s The Nice, Itchycoo Park, Tin Soldier, Lazy Sunday Afternoon and The Universal. The Small Faces always had great belief in their own music and resentment grew when they were forced at times to release more commercial pop hits rather than their own material which had overtones of experimentalism and change. A series of studio albums were produced with their ‘masterpiece’ Ogden’s Nut Gone Flake seeing light of day in 1968. Itchycoo Park was a departure with phasing and other new sounds and became a big hit which is still regularly given a radio airing. Lazy Sunday with it’s music hall overtones is still familiar to many – even those who have never heard of the Small Faces.

The band, as with many other acts in that era, did not have full control or choice over which songs they released due to their Svengalian manager Don Arden. They failed to blaze a trail to US success unlike banks like the The Who due to mismanagement and a minor drugs bust on McLagan for hash effectively stopping them entering the States.

In retrospect, the band members have said that as the complexities of the Ogden’s Nut Gone Flake were so difficult to reproduce live it ultimately proved to be their demise. Kenney Jones was quoted as saying that he would like to have seen the band ‘stick together’ through their difficulties as he had witnessed the The Who do. He felt that if they could have taken Ogden’s on the road they could have gone on to greater and ‘heavier’ things. As it happened, Steve Marriot tired of playing ‘pop’ and after his unsuccessful bid to bring guitarist Peter Frampton in to the band left to join the successful, hard rocking Humble Pie.

It’s a shame to think what might have been because in Steve Marriot The Small Faces had one of the finest white soul voices of all. In Ronnie, Kenney and Ian they had fabulous, top-notch musicians too. They had great song writing and top of all that they had a live presence in their prime that was matched by very few. Above all they had style and individuality.

One can only say that with their disbandment came The Faces with Rod Stewart and Ronnie Wood,, another great but totally different band. It all turned out right in the end, as they say, I suppose.

9 Replies to “The Small Faces – Room for Ravers”