Queen’s Chambers, Old Market Square. One of my favourite local buildings and one that I always think of as quintessentially Nottingham when away from here. Many a time caught a bus home to the suburbs from the shadow of this showy and stately building, in the days when buses and other vehicles were actually allowed to use the city’s roads extensively.

Designed by Watson Fothergill, (1841-1926), a feted local architect with a penchant for turrets, towers, tall chimneys and wall decorations of horizontal blue-black bricks.

Fothergill, who designed some 100 buildings in Nottingham and the East Midlands also enjoyed a little Gothic imagery through the addition of gargoyles, animals, plant life and heavy dark wood beams in his unique designs.

His striking buildings remain testament to his imagination, dotted around the Lace City still to this day.

I really like this fine, atmospheric painting which, as the winter draws inexorably closer, reminds of colder, less hospitable days. The Council House and it’s huge  dome containing Little John”s quarter-hourly chimes, standing sentinel over the city landscape as Nottingham’s citizens brave the snow and ice, huddled against the cold in their winter clothing.

A magical image that evokes a wintry Nottingham of a different era. 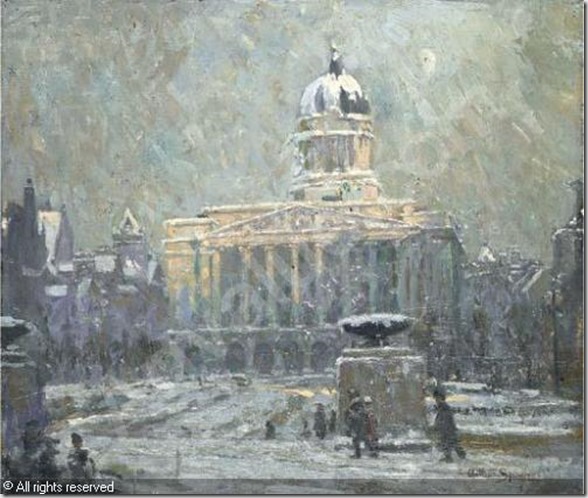 For those of us of a certain vintage the term ‘Nottingham-on-Sea’ applied not to the East Midlands city but to the Lincolnshire resort of Skegness a couple of hours drive east. ‘Skeggy’ as it has always been abbreviated has always been a traditional getaway destination from Nottingham – especially for a day trip by the sea. The fact that arriving in Skegness still leaves a healthy walk to the briny depths of the murky, chilly North Sea makes no difference to the resort’s popularity with Nottingham folk and also visitors from the likes of Leicester, Derby and Sheffield.

Let’s make no bones about it, if you enjoy to be beside the seaside then Nottingham is hardly the place to base yourself. It’s not exactly the furthest destination from the coast in this small island of ours but it’s still heckuva land-locked in geography and travelling time.

Back in the 1990s’ the local council struck up the idea that bringing the seaside to Nottingham might be an option. They did this during three summers in the Lace City during that decade. My fragile memory also tells me that this indeed happened in the 1970s’ on one occasion too as part of the sadly aborted ‘Nottingham Festival’ of the time. This is not to be seen reported anywhere in the media though I note. I know what I saw though, those donkeys for one thing…

Nottingham boasts a ‘new’ Old Market Square these days. It’s former design has been manipulated into an arguably inferior looking area but one that is infinitely more practical to use for events. This is due to the levelling of the former ‘Processional Way’ through the centre of the old market area that was. In recent times this has provided a home for ‘The Nottingham Eye’ ferris wheel, an outdoor ice rink with accompanying German Christmas Market, music stages and other sundry events.

END_OF_DOCUMENT_TOKEN_TO_BE_REPLACED

It’s been nine years since the city of Nottingham began an official day of celebration for the Patron Saint of Ireland. This year’s festivities were spread over three days, partly due to the Roman Catholic church decision to alter Saint Patrick’s day

Scheduled was a good-sized parade from the Forest Recreation Ground a mile outside the city. The parade would head it’s way towards a culmination in the city’s Old Market Square forty-five minutes later. Not being in the best of health unfortunately, I decided to avoid the long hours outside following the parade and it’s aftermath of entertainment in the square. This did not stop me from enjoying a very pleasant afternoon and evening in Nottingham however.

The Council House in the Old Market Square was opened up for the celebrations with a dance, licensed bar, and an art exhibition in the foyer. As long as I have lived in this city I have never once been beyond the stately lions that stand guard outside the large imposing building. On that note and after watching an excellent band from County Tyrone on an outdoor stage for a while, I decided to press on inside and have an exploration – along with my camera.