I talked to a man a few nights ago, just a little older than me, a Forest man all his days. Joe Baker was his great hero as a youngster. He told me that in 1968, when he was just a boy, Joe visited him in the General Hospital in Nottingham. Joe took that little boy a football annual as a gift and signed a photo of him playing in Forest’s dashing away white strip of the time.

Please now flash forward to the early 2000s, not long before Joe passed away. The great centre forward came back to meet his adoring fans from the 1960s in Nottingham. (Joe and his memory continue to hold a very special place in Nottingham – just like everywhere he travelled.) My friend took his football annual from that hospital visit when he was a child to a tiny city pub, The Falcon Inn, where Joe was meeting old friends in town. The landlord who had informed of his visit him asked him to keep it quiet as he didn’t want the wee howf overrun with admirers and fans. 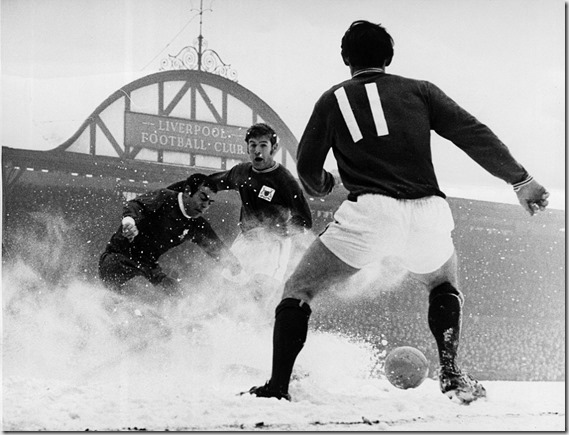 Another meeting some thirty-five years on and my friend got to meet his hero again. Joe apologised profusely to my friend that he couldn’t remember him as a child. He happily said that he’d signed many annuals for the sick children of Nottingham. My pal told him that he’d been his great hero and Joe simply replied, very humbly, that truly, he could never understand why he was so hero worshipped. He said that he was just doing his job which was being paid to score goals. He also said that his time in Nottingham had been the happiest time of his career and that he loved being here.

I’m a Hibs fan, born with it, I have green and white blood but boy did that last comment bring a warm feeling inside.