RECENTLY, I CONTRIBUTED to a discussion regarding ‘loyal’ footballers. Those two words together seem an anachronism these days and personally, I don’t see players who deign themselves to stay with the likes of the Manchester Uniteds et all of this world receiving out-of-this-world remuneration

The first player that came instantly to my mind was one that many will not have heard of.

Bobby McKinlay was a Fifer from Lochgelly in Scotland who was associated with Nottingham Forest between the years of 1951 and 1970. Over those years, Bobby made 614 appearances for Forest, his only top class club and scored nine times. 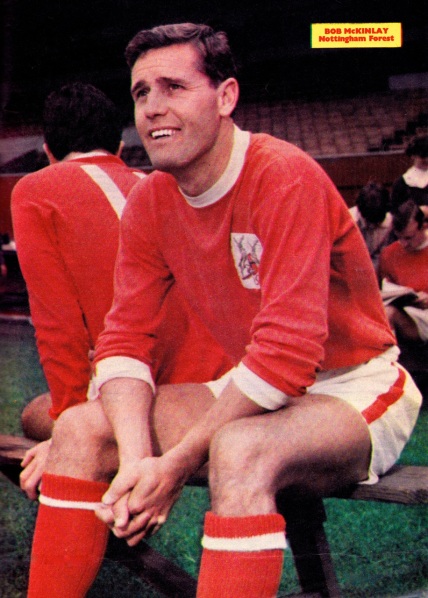 Bobby, though uncompromising enough on the field of play, was a gentleman on and off the pitch and was renowned and loved at the City Ground for that. Young supporters were always, in particular, treated well and kindly by Bobby, him making sure they all got team autographs and bringing treats to share out among the kids when they would gather after Forest training mornings for signing sessions in the club car park.

After retirement he became an officer at the local Lowdham Grange Borstal in Notts, where his even-tempered and understanding way with young people brought him great credit in his new career.

Though playing at centre half, Bobby wore the Garibaldi red fully 439 times before being even booked. The irony is that it was after being pulled up for a foul on an Arsenal player and booting the ball into the crowd, a player by the name of Joseph Henry Baker – a dynamic centre forward who not long afterwards became his teammate at the City Ground starring in a terrific tilt at both the league title and FA Cup, both of which were punctuated by Joe’s lightening quick, exciting forward play, littered with goals and much adulation.

When I think of loyal football players, yes, I think of Bobby McKinlay who left the game of life in August 2002. Times have sadly changed but if there were only a few like him now.