Today: The third and final part of the trilogy attempting to compare and contrast Hibs’ lauded team of the 1970s’ with a selection of all-stars from the decades since. The respective managers take a hand too – one that is more than a little influential!

Jimmy is many people’s favourite Hibee and it’s not hard to fathom why. There was a certain spell when he couldn’t seem to stop scoring hat-tricks though a certain Edward Turnbull 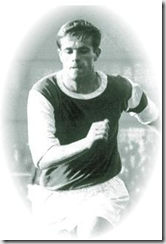 at times seemed blind to these deeds. Jimmy O’Rourke was a predatory natural scorer and with him buzzing around up front…well anything was likely to happen.

Stevie Archibald came along to a few fanfares direct from Barcelona and was maybe one of the most outright classy players I’ve witnessed in the green and white. Slightly imperious and dismissive of attitude at times, one had to accept this of ‘Archiegoals’ has he was a player who knew his own worth! He came along in an interesting time at Hibs when a few headline-making signings were being committed to the Hibs cause. It didn’t last but it was a heck of a good watch while it lasted.

Alan Gordon was an intelligent footballer as his manager famously noted and was also a pleasure to watch the way he fulfilled his striker’s role. Like so many players under the spotlight here, it was difficult to hurry Gordon in to a move he didn’t want to make. His play was based around the way he wanted to play and let go the kind of shot or pass that he determined was the right one at the right time. At times it appeared somewhat languid. Alan Gordon was certainly one of those players who had the uncanny ability to be able to ‘hang’ in the air when rising for a header in the box. Of course we all know that this ability is all about split-second timing and it’s perhaps this that gave the Tornadoes striker such a feared reputation as an aerial threat.

END_OF_DOCUMENT_TOKEN_TO_BE_REPLACED

Continuing with the quest to compare the great Turnbull’s Tornadoes team with an XI selected from players gracing the green and white of Hibernian FC since those halcyon days. Today I look at the midfield contenders with some classic match-ups and confrontations derived from the last four decades.

Another complete contrast in styles but operating in the same area of the field. Alex Edwards was all about creativity and displayed a near-genius for spraying the ball around to his teammates all over the field. Sometimes accentuated and occasionally hindered by his naturally abrasive

character, opponents would often key on this strength/weakness in Alex’s game. With a man like Alex around though something was always happening – usually another penetrating attack set off by one of his sublime passes.

I’ve gone back almost to Tornadoes days to delve and find a worthy competitor in this area of the team and it’s the superb Des Bremer who has been pulled out of the hat. Perhaps Des’ greatest moments were with Aston Villa in winning the League and the European Cup but he was a great and consistent performer at Easter Road. Des’ trademarks were his surging, driving runs down the right wing and his tireless tracking back and work ethic on behalf of the team. Perhaps one of those types of players who tends to be a little overlooked by more showy performers, it’s no surprise to me that Aston Villa manager, Ron Saunders saw him as the man to tend his great Villa team’s right flank through their successful years. You knew what you got with Des Bremner. What’s more you’d get it every week too.

END_OF_DOCUMENT_TOKEN_TO_BE_REPLACED

It’s the eternal football argument – comparing the best of yesterday with the best of today. Along with the glittering and famed ‘Famous Five’ side, Eddie Turnbull’s famed ‘Tornadoes’ were arguably Hibs’ greatest XI. Can more recent players compare? In the first of three articles I examine and compare players since that time, man for man, with Eddie Turnbull’s exceptional side

Many of us long-time Hibs supporters enjoy a nice stroll down memory lane, recounting tales and waxing lyrical about Hibs’ superb, fluently talented team of the 1970s’, ‘Turnbull’s Tornadoes’. I often wonder how the younger generation feel about this, and consider how their own heroes would stand up to scrutiny and comparison with that much-lauded team. In fairness it c

an be a little galling hearing time and again about a ‘great’ team from a previous generation – especially when one considers how much football has changed over the decades. It’s perhaps important in the case of this debate to remember the argument that, in spite of seemingly limitless talent, the Tornadoes achieved relatively little by way of silverware in that very entertaining era. A contributory reason for that is the fact that they operated at a time coincidental with one of the great sides in Scottish football of all time, Jock Stein’s Celtic.

So how do the Hibees of more modern generations compare? It’s tempting to say ‘not too well’. I must of course firstly admit to my personal bias towards Eddie Turnbull’s magnificent team. I was ‘that age’ in their heyday – an age when footballers seemed like gods. I hope to however select a team here that would provide a stiff challenge to those talented men in green. It’s an eleven selected from every team since those halcyon days of the 1970s’ and I happen to think would provide one heck of a football match.

The teams are formed into a 4-4-2 formation and whilst I’ve attempted to match individual for individual, that’s of course not always a fair or apt comparison. Bear with me though as we take an enjoyable and fun tour through the skills of some of the greatest modern-day Hibs players. Undoubtedly Hibs fans out there will have their own opinions on this one – I welcome your views!

END_OF_DOCUMENT_TOKEN_TO_BE_REPLACED

I recently set my mind to the question as to who are the ten greatest Hibs players of all time. What a difficult job that is over 130 years-plus of history but here are the selections I came up with. In fairness to those great players that played in an era before mine, I’ve picked one or two on repute and and based those choices on reading, research and repute. 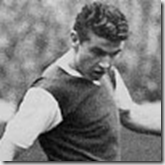 Joe Baker
My personal Hibs Hero. Along with Lawrie a toss-up for the best Hibs striker of them all. Joe was world-class, make no mistake. Lightening-fast, a cannonball shot with both feet and a superb header of the ball in spite of his modest height. A feisty attitude on the pitch also made this man the complete centre-forward. A great man off the pitch to boot. 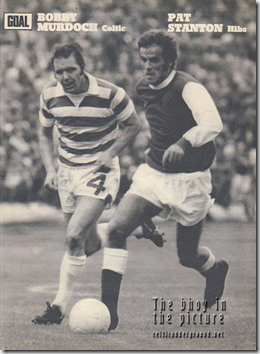 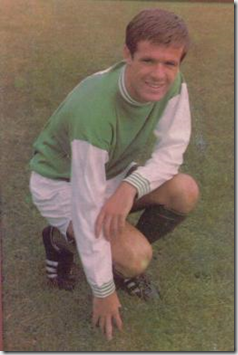 Patrick Gordon Stanton
What more can one say about this man? A wonderful athlete and a player who had that gift of being unhurried and extremely composed on the ball. The perfect footballer

James Dunn
A forgotten Hibs hero but surely one of the greatest of them all. Jimmy was an inside-forward for the great ‘Wembley Wizards’ and vastly talented as a big money move to Everton will testify. Noted as something of a ‘clown prince’ of his time and a great entertainer with his intricate ball skills. END_OF_DOCUMENT_TOKEN_TO_BE_REPLACED