Rock and pop music is so fabulous in the way it can practically get away with anything at all sartorially. I’ve always been

interested in how some bands assume a ‘uniform’ to accentuate their image. Way back to the 1950s’ doo-wappers and through the 1960s’s with such huge luminaries as The Beatles themselves with their collarless jackets and mop-tops. The seventies provided some rich fodder of course via the conduit of glam-rock and punk rock in particular. It’s easy to recall too, the New Romantics of the 1980s’ wth their foppish fringes and attitudes. Sometimes things can get seriously over the top of course. Here are one or two examples of the more memorable examples.

Here are a few oddities amongst a cast of simply thousands…

~
Some excellent example to choose from but firstly one can easily see
how these boys might go down a bomb.
Appearing at an arena on the Gaza Strip near you.
~

~
“Are we not men – we are Devo”
Perhaps Devo are on of the first bands that come to mind
when we think of slightly…erm avant gard apparel?
~

~
Some local boys now from Nottingham. The excuse ‘The Nerve’ might use might be that this was a typical period piece from the date of this publicity shot in 1967. I’m just trying to figure out the thinking behind this one though,
‘hey guys, know that important publicity shot today? You know the one that’s going to propel us to world stardom? Well I’ve got this idea – let’s all dress up from head to toe in see-through plastic suits.’
Band (together): ‘Yes, lets’.
~
~
I have to confess to liking this band at the time.
New Zealand’s, Split Enz were funny and original and
showed their quality when Crowded House were formed
from their midst.
Strange hairstyles and even stranger facial expressions.
~ 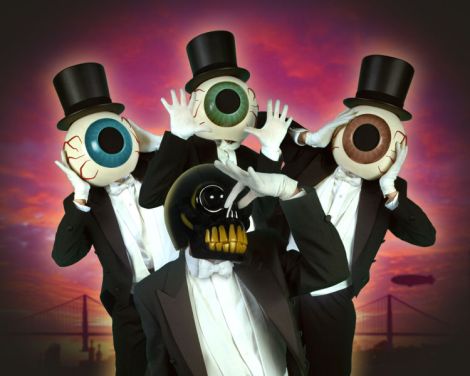 ~
The Residents were surely king of all the weird bands.
There’s just something nightmarish about those huge eyes isn’t there?