The last time I wrote in The Marathon Diaries it was to report a hamstring injury that I had sustained and hopefully recovered from. Injuries are such a difficult subject for the runner, never more so for the marathoner with a large quantity of hard work in training potentially going to rack and ruin before a race. With that in, mind it was quite some relief I was experiencing as the injury appeared to subside nicely with the aid of a lot of judicious care.

A new and more serious threat reared it’s head a week yesterday though. I had thought it a reoccurrence of the hamstring problem and was treating it as such. During the course of a couple of short runs of 3-4 miles at the end of the week I began to despair as the pain was there throughout the runs and did not fade post run.

From this past weekend I had for all intents and purposes given up on getting to the start line of the 2009 Robin Hood Marathon next Sunday. I have to admit I felt pretty desolate about this as the Marathon training has been an important part of my personal progress and achievement over the past few months. I’m a fairly obsessive kind of person and that can mean to my detriment as well as in more positive ways. This Marathon was very much the centrepiece – the jewel in the crown of my new and healthy ‘rebirth’ if you will  Consequently the injury was a very personal blow and that’s the way I took it. 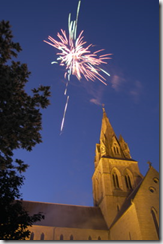 Yesterday I attended Sunday evening Mass at Saint Barnabas Cathedral in Nottingham, my regular place of worship. I think you can probably guess what I was unashamedly praying for last evening. I even touched my aching leg with the remnants of holy water on my fingers upon leaving the Cathedral.

Tonight I attended my by now regular appointment at the physiotherapist. ‘How are you doing Stuart?’ ‘Pretty despondent, I guess’ was the reply. This was to be the most enlightening visit however. We discussed the problem and decided it was a new injury – to the left lateral quadricep as opposed to the hamstring. Crucially the physio claimed that it was not probably a tear to the muscle but much more likely to be a ‘knot’ in the muscle tissue, as the pain did not transmit elsewhere but stayed in a very focal spot.

The big question then… ‘Do I run?’ I don’t know what to do and I don’t want to cause long term damage. The reply was heartfelt and considered, ‘you HAVE to give it a go don’t you!’. The physio advised me to run and that IF the pain got too much to pull out during the race.

I was slightly speechless at this point. I had imagined that my hopes of running were long gone.

Maybe I sound a little silly, and I don’t really care too much anyway about that but driving home I felt a little overcome and quite emotional. My dream of carrying on my personal progress in doing the race was ‘on’ again. I began to think about Mass last night and how hard I prayed for this to happen. I felt like my prayers had been heard.

I’m not out of the woods. I still have an injury of sorts but one that is not as serious, particularly in the long term, as what I had feared. I’ve had the last four weeks of my training curtailed and am going into the race less prepared than I hoped. It seems to matter little tonight though, I’m still ‘in the game’.

I’m going to be on the start line at the Nottingham Trent Embankment on Sunday for the gun at 10.05am. I have many thanks to give for that.

4 Replies to “The Marathon Diaries: A Minor Miracle!”