The area of Nottinghamshire in which I live, Redhill, has seen quite a few changes over the years. Like many other places it has lost a few small businesses along the way, including a grocery store, a newsagent, the original post office and an excellent fish and chip shop. Two constants over the years though have been it’s two very old and neighbouring pubs, The Ram Inn and The Wagon and Horses which both stand prominently on the main Mansfield Road .

Just recently I have noticed that ‘The Ram’ has been closed up tight, boarded off and with workers cabins in the car park. It’s not clear whether this was to be a much-needed refurbishment as I’ve  been assured the old public house has closed it’s doors for good and that it’s future is apparently as an eighty-bedroom residential care home. Contradicting this there are signs outside which indicate that is to reopen as part of a chain of pub restaurants. Who knows the truth but it raises the thorny situation of the future of so many British pubs.

Both of Redhill’s pubs are of a considerable vintage. The Waggon and Horses was reputedly built in 1827 as a coach house for the main arterial road north it stands upon while the The Ram is a few years it’s senior being built in 1789. I am informed that both pubs these days have a shared owner who has decided to close one of them. I dare hazard a guess that The Waggon has been kept because of it’s historic coaching inn past but that’s just conjecture on my part.

Over the years I had been a customer of both pubs. Before their lamented disappearance, the two main local breweries had been represented in the two pubs, The Wagon carrying Home Ales beer from it’s Daybrook premises just a mile down the road whilst The Ram sold the less popular Shipstones ales made at The Star Brewery at Basford approximately just three miles away. Customers tended to go the pub whose beer they preferred. Well into the 1970s, The Waggon still retained its stables that had been originally used to replenish stage coaches with new horses in order to climb up the ‘interminable rise of Redhill’ northwards. Latterly the stables housed the pub’s toilets and in another area had swings for children as I recall.

Local landmarks: The Wagon and Horses and The Ram Inn

Latterly, The Ram had slipped so far backwards it was difficult to know what could be done to improve the place. It was a very good example of the typical ruination of a decent pub after the separate bars were gutted to make one large area.  Together with a considerable extension to the rear, largely to woo potential diners, the atmosphere was barn-like and it also looked worn, tired and dated with it eighties-style former renovation.

Although only minutes walk from my home I have rarely used either pub in many years so I can understand how it has been difficult to retain the profitability of both establishments. I would have loved to support my local community’s public houses if either had been more to my taste. Typically, about once a year I’ll take an annual stroll up the road to see if anything has changed. With both pubs being in such close proximity it was always easy to pop round next door if one was a little quiet. My usual experience has been to enter The Ram through it’s side door, find it almost completely deserted and walk straight out of the front door and on to The Wagon. In truth though, neither pub seem like the nice old local pubs that I used to visit years ago. Times have changed and I’d sooner go to the trouble and expense of taking a return bus ride into the city where I can have a quiet drink in somewhere with a little ‘life’ in it and enjoy a good range of more interesting drinks such as some of the continental lagers and quality ciders. I don’t feel particularly pleased to say that and I’d love to have seen the old Redhill pubs back in their former guise and enjoy a walk up the road to enjoy a drink with a neighbour or two in a proper ‘local’ pub. It’s all a bit of shame. 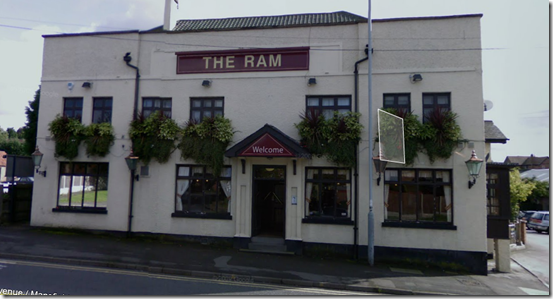 The news about The Ram Inn is hardly isolated. So many of our old pubs are disappearing forever and things will never be the same again. Another local pub, The White Hart which was an incredibly popular and busy pub years ago, now lies forlorn and graffiti-laden, doubtless awaiting demolition and redevelopment for retail purposes. It’s last apparition as part of a mediocre restaurant chain now a predictable memory. I never would have in the past foreseen the day when the likes of that place was no longer.

The Ram Inn lies in sullen darkness at the moment after over two-hundred years of quenching locals’ and passing travellers’ thirsts. I hope it’s not all over for this well-known local landmark. What a dire state of affairs our local community pubs find themselves in in 2010. The biggest shame is that should the likes of The Ram Inn close down it would do so largely unloved and unlamented. It was not always thus.