NOTTINGHAM’S OLD MARKET SQUARE has been central to the city’s life and times for approximately a thousand years, formerly as a large outdoor market as the name suggests, home of the historic Goose Fair each October and a meeting place renowned over the city and wider county. The wide area, arguably the largest market square in Europe reputedly, now changed from it’s last design of a handsome processional way with trees, fountains and plentiful seating for the public was much-loved by Nottinghamians but is now comparatively sterile and bland in appearance. The re-design, reputedly ordered to allow more freedom and capacity for the various events that are held in ‘Slab Square’ as many local people have called it over the years and a is somewhat controversial decision some years later still. 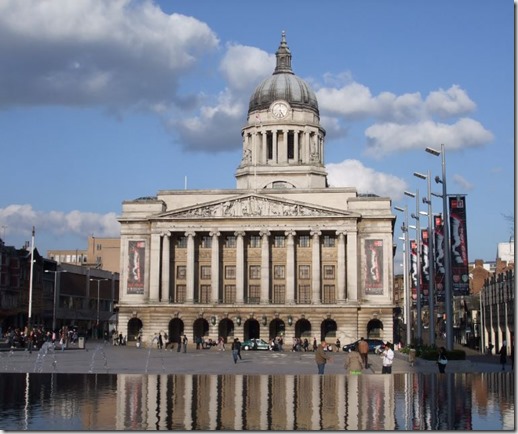 The lions, known perhaps most commonly as ‘Leo and Oscar’ are also known by some, more grandly, as ‘Menelaus and Agamemnon’ and also ‘Lennie and Ronnie’, take your pick . They were sculpted by Joseph Else, the Principle of the Nottingham School of Art at the time. His name is now commemorated as the name of a public house nearby in the Square.

This quite severe looking chap below is the ‘Left Lion’ and whilst both lions have been used over the decades as traditional meeting places it is the Left Lion that holds the greater popularity. ‘See you by the Left Lion’ a (or the lions) has especially been a place to meet a romantic date. I’m told it’s ideal to check out a blind date from a distance and it has been my observation that people circling in the nearby vicinity are occasionally apparent. Other than that I couldn’t possibly comment…

Another piece of historic Nottingham folklore was that the lions roar when a virgin walks past. i couldn’t possibly comment on that either. 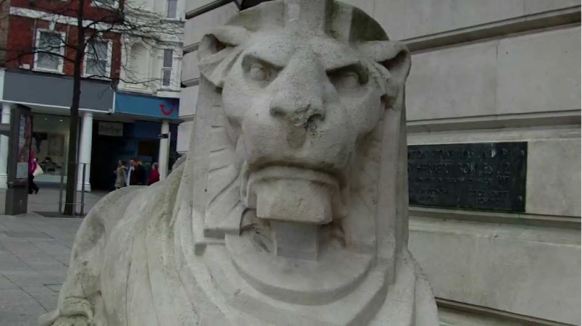 In the 1920s the former Exchange Building overlooking the Square was replaced by the current Council House construction designed by architect, T. Cecil Howitt, with its 200 foot high dome housing the ‘Little John’ clock, weighing in at over ten tons, which chimes throughout the day as a backdrop and part of the soundtrack to Nottingham city life. Outside the building, two large stone lions stand sentinel, guarding the grand old building opened by the Duke of Windsor in 1929.

Nottingham’s Old Market Square has seen much activity and a few joyous occasions in its history. The annual Goose Fair, so named due to poultry being walked to the event from deepest Norfolk and Lincolnshire was and is a huge landmark on the Nottingham calendar, continuing as it does on the Forest Recreation Ground around a mile away and now over 700 years old. ‘Gooseh’ must have been quite some occasion in the old days as not only did it have such ground breaking innovations as the early travelling cinemas but one could buy practically anything there – even a wife! I think the latter custom has discontinued now.

Football and other sports celebrations have always been a nice feature as the Champions are paraded on the Council House balcony. Notable were celebrations for Nottingham Forest’s European Cup winning teams and, before my time, their great 1959 FA Cup success after they had won their Wembley final with nine and a half fit men on the field. Perhaps Slab Square’s greatest celebration occurred on May 8, 1945, when the war in Europe was over and the people of Nottingham let heir hair down in grand style.

Walking through the square these days I am always disappointed at it’s bland, grey appearance – which cost the council an awful lot of money incidentally. There is a water feature but it isn’t handsome as the previous fountains were – even when students chose to create a bubble-a-thon with washing up liquid emptied into the originals! The seating is at a minimum and the vegetation that saw the Square win awards for its attractiveness is no longer. Instead there are ‘events’ which leave the area looking a little forlorn when they move on.

Other random memories of Old Market Square come to mind of Mods and Rockers gathering there in the 1960s in their two factions at either end of the Square, shepherded apart by the local constabulary. One of the latter’s number was ‘Tug Wilson, a formidable and well known character, standing some 6ft 8ins and fully 7ft 2ins in his policeman’s helmet!

The fabulous mosaic of the Nottingham heraldic crest has disappeared and the ‘feel’ of Nottingham’s Old Market Square appears long gone and spoiled. In balance, there are some good points though. A German Christmas Fair appeared some years ago and was a pleasant winter addition. These days the ‘German’ has been taken out of it and, to my eyes, ears and taste buds has unfortunately become not only expensive but mediocre too. A great plus though is the outdoor ice rink which adds significantly to the winter atmosphere.

Conversely, each summer now, the Square welcomes the ‘Nottingham Rivera’, an urban beach constructed for some weeks in the high season with its sandy beach, padding pool, funfair rides and popular beach bar along with special events throughout its duration. 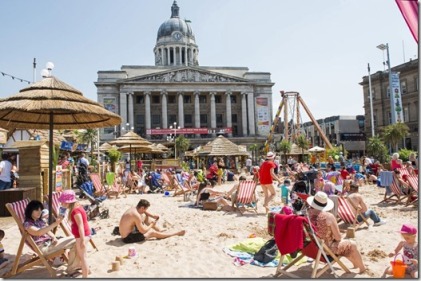 As a visitor to Nottingham, it is difficult to become lost in it’s concise city centre as all roads lead to the Square and its dominant Council House dome. Unlike many cities, it is easy to discern exactly where the centre of ‘town’ is and for that reason and a few others, wherever I roam in the world, the Council House and it’s lions will always symbolise Nottingham to me.