Last Sunday saw the annual Worksop Half Marathon take place, this year on Halloween which added a little colour to what I had found a year ago to be a very pleasant event.

They like to call the Worksop race ‘the scenic one’ and it should be said that this term is by no means undeserved. Beginning in the market place in the centre of town, the route runs for some four miles along an agreeable and undulating lane before taking an abrupt left turn into beautiful Clumber Park. The course then passes through the pretty country park for perhaps seven miles before surfacing at Worksop Colleges and finally back out onto the tarmac for a last stretch into town through a residential area. 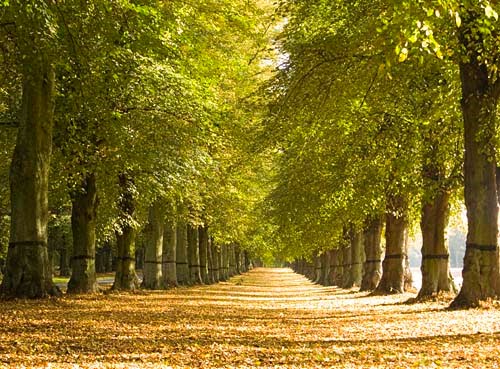 The Worksop race is well placed at the end of October as it is a fine time to witness the autumn russets, golds and rusty browns of the trees in the park which would have at one time been part of ancient Sherwood Forest. The atmosphere is redolent of nature in the fall and overwhelms one with thoughts of the ‘season of mellow fruitfulness’. This makes the Worksop experience one to seek out for the runner who insists on an interesting and appealing environment in which to compete. All around, the rustling leaves and shyly opening chestnut shells are underfoot. On this day, swirling around in a slight breeze and under and an ashen sky.

The run my friend and I intended to do this year was intended as nothing more than a little training and a change of scenery for this particular Sunday. Safe to say though, many competitive club and non-affiliated runners battled it out for the prize money from what looked like a healthy field. As always, it was interesting to see the many and varied club vests being sported. Some were from local Nottinghamshire clubs such as my own area’s Redhill Road Runners with their distinctive horizontal red band and my former club as a teenager, Notts Athletic Club in their striking traditional city colours of green and gold. The event appeared to have drawn not only many runners from north Nottinghamshire, with it’s keen running tradition, but also a good smattering of South Yorkshire athletes. This was a reminder that Worksop is comparatively remote geographically from it’s county town to the south and is only a healthy training run away from Nottinghamshire’s northerly neighbouring county.

An early start and an urgent Sunday morning drive of perhaps thirty miles took us to a parking spot in a residential road before beginning the race. As previously mentioned, our day was primarily aimed at a little extra exercise and to enjoy the pleasant scenery but it was difficult to not become enmeshed and motivated in the excited atmosphere of race day as we should have known. 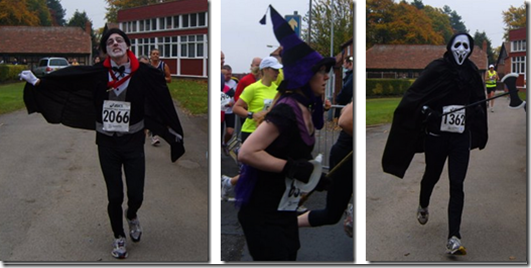 Strange goings on at the Worksop Halloween Half

Of course it was October 31 – Halloween, and there were plenty of modern signs of the ancient Celtic festival around us. Race marshal ‘skeletons’, Jack O’ Lanterns, and an eight-minute-miling warlock or two. There was also an abundance of wee red devils interspersed by an odd zombie or two. It all added colour to a refreshing and fun day.

Back in town and after a decent workout for the day, we found a bar offering an inexpensive lunch and a drink deal and set our slightly weary and rapidly stiffening bodies down for an hour. Perhaps the most important thing that came out of the day was a resolution and a new determination to tackle a winter training schedule to work towards greater fitness again. It still surprises me how attending these events can spark a little motivation and determination. Through a profusion of subtle autumnal colours the winter approaches, I feel more ready to do battle with it.

I’ve had heard many people bemoaning the ‘modern’ Americanisation of All Hallows Eve and this is perhaps understandable in some ways. The UK has an arguably healthy cynicism towards business chasing a fast buck when spotted and I’m sure that this is the main reason for the antipathy in attitude we see in England specifically. I’m sure it wasn’t even the first day of display but I noticed a local supermarket with a whole

section of Halloween stuff on sale on October 1 this year and I know how people in this country can rail against having a money-making extravaganza foisted upon them, I feel the same way.

It’s a curious matter because as many people who know their history understand, the pagan festival is one that was largely originally observed in the Celtic countries of Scotland and Ireland, and still is to some degree in some areas. In other words it could be said that we bestowed the celebration of Halloween on North America originally, and as is often the way with these things, they now appear to be exporting it right back to us.

For a good few years now we have seen groups of young children parading around our residential streets in Trick or Treat garb, aping the North American Halloween festivities. I see nothing wrong with this for very young kids if is it safely supervised by adults and a little effort made to make the party go with a swing, transatlantic style. Having strong Canadian connections I’m happy for my partner or I to grab a few bags of sweeties and treats if we’re going to be at home that night and hand them out to the littlies in their guises. I know that many don’t feel the same way though and perhaps this is because the English style is to turn up and request a treat by the way of hard cash. Dare I say here I don’t think this is in the ‘spirit’ of the thing? There, I’ve said it. An amount of ugly vandalism has managed to find it’s way into the night here, sadly too.

One of the funniest Halloween stories I remember comes from one of my many stays in Canada a few years ago. Staying at friends in Trenton, Ontario, our male host talked of a previous Halloween night jape which terrified the local trick or treaters in fine style. Our host was a member of the then Royal Canadian Air Force and had managed to ‘acquire’ a parachute harness from his base. In a fit of ingenuity that only we men who have never really grown up can muster, by using the harness he arranged himself to be ‘hanging’ from the front garden tree, execution style, when visitors arrived to trick or treat. Beat that.

It was all a bit different and less expansive (and suspenseful) when I was a lad. I’m not sure whether it was the Scottish influence of my family but there’d seldom be an October 31st pass without a hollowed out

‘Jack o’ Lantern’ being produced. Did I say it was different then? Well for one thing there were no pumpkins used, those fanciful vegetables were something we only read about in fairy stories when somebody would turn into one at the strike of midnight for some minor timekeeping indiscretion or other. No, pumpkins were for the rich or mere sissies.

The good old honest-to-goodness turnip was our vegetable of choice. My mum and dad, in the good old Scottish vernacular called them tumshies and that’s what I always knew them as. Hollowing out the tumshie was a difficult and skilled task. It would entail a cheap penknife; a manual can opener and practically anything else you could get your hands on not to mention what seemed like about four months of hard labour. Many were the skinned knuckles and strained muscles in the pursuit of perfection for the big night. A jaggy mouth and the all-important cheap candle in the hollowed out centre, hang him in the porch from a nail and string and you were away and qualified to petrify.

The last time I had any involvement with Halloween in a tangible way was when working in a school for children with special needs a few years ago. Several of the female staff turned up in witches’ guise and I have to say I was impressed although it was not clear if one or two were returning to type. Seems like the kids were stupefied too as they worked pretty hard that day and remained light-hearted, which was by no means always the case, throughout the day’s activities.

Halloween then. Not nearly as good or exciting as Bonfire Night just around the corner (which was immense) but hey, what else can you do with a turnip apart from serve it with haggis?

Well that time of year is almost upon us again – Halloween. Like many events around the calendar appears to have grown from a single-day happening into a ‘season’ that has been overtaken by commercial considerations. For similar read Guy Fawkes Night, and Valentines Day.

Legend tells us that October is the most important of days in the satanic year and once marked the Celtic New Year. It is significant in that it arrives at the end of the growing season and therefore became known as a ‘festival of death’. END_OF_DOCUMENT_TOKEN_TO_BE_REPLACED