RECENTLY, A STUDENT at one of the local universities requested, after browsing The Tears of a Clown that I participate in her research on the topic of blogging and it’s relationship to journalism. There were a few interesting and well-conceived questions posed and taking part became a thought-provoking exercise. This site celebrated it’s sixth birthday this month so it seemed to be an opportune time to consider the medium of blogging generally. The questions and their answers are recorded below

Why did you decide to start blogging?

I initiated my main blog in August, 2007 after attending and being inspired by a talk at Lowdham Book Festival, Notts by a leading blogger who now writes professionally. I had previously experimented with blogs in a small way for field research and also ran a free traditional website for a while. I migrated all the previously written articles on the latter to The Tears of a Clown.

‘Tears of a Clown’ has reached 512,904 views. How do you feel that the privilege to communicate on a mass scale has been extended to anybody who has access to the Internet?

I enjoy the freedom to publish my thoughts, beliefs, experiences and knowledge in this way. Clearly, it is a great opportunity for anyone with something to say and my personal belief is that it should be respected. There were other online means previously, for example internet forums and some may claim that blogs have in some ways been superseded and outgrown by other social media such as micro-blogging etc. I still however, find it more satisfying, generally speaking, than those methods of communication. I do however, generally use these different means for different purposes.

How do you respond to the notion that blogging has undermined the privileged position occupied by journalists?

With barely suppressed hilarity I might say! Certain areas of the world of journalism undermine themselves on a regular basis with their irresponsibility and bias. Although I remain a fan and supporter of quality journalism, too many individuals and organisations have brought about their own downfall and therefore I have little sympathy that they are now being regularly challenged.

How do you respond to the opinion that, as a blogger, you are unfamiliar with the process of news gathering?

I respond by saying that I am not a journalist and don’t see my efforts at writing and communicating to be inextricably bound together with news gathering. In addition, my experiences of reading some (not all) newspapers is that their own journalists show themselves to be lamentably poor and indeed lazy, in regards to news gathering at times. I might cite the scanning by certain professional journalists of personal blogs and internet forae etc. for stories. If they use this information gathered to form their own story, with little basis other than a member of the public’s opinion, as I have witnessed them do, what does that say for the accuracy of their own published work?

How do you respond to the critique that blogs have received in that bloggers tend to value immediacy and comment as opposed to accuracy?

I would say that is sometimes a fair criticism. It has though to be remembered that most of us do not blog for a living and therefore only have a finite time to fact find – unlike professional journalists. In fairness, and as with journalists, I believe that there should be a certain responsibility upheld when publishing material on a blog. I attempt at all times to write what I reasonably understand as the truth before pressing the submit button. If I’m not convinced of something’s legitimacy I’ll tend to not publish it. I don’t too often write about contentious issues but I still think that’s a good yardstick to adhere to.

Do you think citizen journalism is fairly representative of the wider public?

If you mean by that, blogging then yes, I think it can be construed as reasonably representative. Of course that representation is by those of us who wish to write and communicate, inferring representation by a certain type of person or section of society. I struggle to understand at times how a journalist and his sub-editor could be seen as more representative in any case.

Would you say, blogs play a part in keeping journalists honest/holding them to account?

There are too many dishonest and biased examples of journalism still to be able to say that always works but I suppose it helps in that process. That the public have so much more opportunity for redress is a good thing in my view and perhaps, I’m not sure, it may occur to journalists that they may be taken to task in various places if people are in disagreement with their opinions and statements of ’fact’. A healthier state of affairs than existed previously I would suggest.

I’m not sure how the city of Nottingham compares creatively in the sphere of blog writing with other similar cities. Save for Edinburgh perhaps, I haven’t the time to scour contemporary towns and their respective blogs and observe how they stack up against the output from The Lace City. I have a hunch though that Nottingham is pretty well served by it’s blogging and writing talent generally.

The Tears of a Clown is not necessarily a ‘Nottingham Blog’ by any means. I tend to just write about the subjects that interest or amuse me and the experiences I have. Nevertheless any visitor browsing through this site will come across plenty of Nottinghamshire content and I like to maintain the site’s partly local identity. In doing this I often browse around to see what my fellow Nottingham based bloggers are saying and am seldom disappointed in what I come across.

I initiated this blog site after formerly running my own regular website and posting articles on there. In June 2007 I attended a lecture at the Lowdham Book Festival given by Mike Atkinson. What I heard that day in a most entertaining and hugely informative talk by Mike, prompted me to initiate The Tears of a Clown. It’s only fitting then that I begin by linking to his own blog, troubled diva.

‘Without a doubt, drivel is Mike’s forte’

Don’t be fooled by the tag line, Mike Atkinson’s piece of the Web has pretty much all the things you might enjoy about a blog experience. Great content, quality writing, humour and information. Although going through a hiatus or two due to professional writing duties, it remains a vibrant and fun read, particularly if you enjoy reading about music. Features including the highlighting of other interesting articles from around the Net, Twitter and a well-populated comments section keep up the interest.

‘News, views and musings from the great city’

I haven’t been reading Alan-a-dale’s blog for too long but what I see I like a lot. Lot’s of local content expressed in an individual and very readable and personable style.

Brookes, Alberta’s Rob Cutforth who bills himself as ‘A Canadian in New Basford’ is one of my favourite bloggers and whilst not hugely prolific his articles are always worth the wait. Rob no longer lives in Nottingham having moved to Manchester but posts excellent and hilarious items on the superb LeftLion website, and hard copy newspaper, here in Nottingham. END_OF_DOCUMENT_TOKEN_TO_BE_REPLACED

There are to be no attempts at profound offerings today. No stories of travels, humorous incidents or moans about Hibs’ latest failings! I won’t be talking about music, newsworthy happenings or those little quirks in life that we find curious or distracting.

Yesterday was a small milestone for this site (and I do enjoy a good milestone!) I flipped onto the page which informs me of the statistics regarding The Tears of a Clown to note that the all-time hits for it’s articles numbered exactly 100,000. This statistic is since the site’s inception in August 2007. 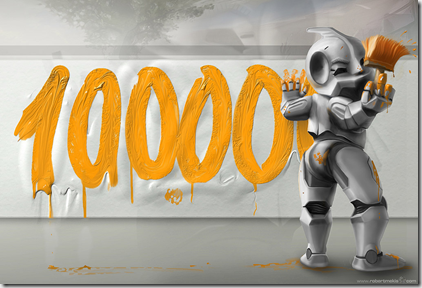 It seems a long time since I decided to abandon my former web page after visiting a lecture on the subject of blogging, two summers ago. Being suitably inspired, a few weeks after that talk I initiated this site on WordPress (who do a fantastic job of providing a free hosting service for hundreds of thousands of blogging sites, I should add). I’m not sure what the consensus if from other bloggers but I know that I’d probably still scribble out these articles if no one chose to read them. However I must say it is always a great pleasure to know that people read and enjoy the things you write and people are overwhelmingly kind in their comments. I learn a lot from the too.

I know that as well as the general public surfing in from the likes of Google, many of my friends and family read my mutterings here. Indeed one dear friend tells me she drops by ‘just to check what I’m up to!’ I’d like a to say a warm ‘thank you’ to all those that do visit, it’s appreciated. Please call again, and why not leave me a comment or two!

Although a now rather overdue admission for the Lowdham Book Festival, I thought this event was well worth recording. The event itself had been moved from the Women’s Institute Hall down the road, having fallen prey to the inevitable floods the village and surrounding area had been

experiencing. On a damp and soggy day then, my partner and I skipped into the talk just a minute or two into proceedings

Mike Atkinson of the ‘Troubled-Diva’ blog gave an extremely informative, lively and humourous account of the world of blogging. Blessed with the light-hearted style his blog is written with, he recounted tales of this relatively new phenomenon. Notable was his tale of a serious blog stalker who was actually prosecuted for her misdemeanours towards a fellow female blogger. This talk however covered the subject most comprehensively and would have appealed to people who had an interest in beginning a blog, and expert ‘first wave’ blogger alike. Mike covered the thorny subject of book deals for bloggers and the jealousy that can arise between fellow bloggers due to this. He maintained that there was no easy way to achieve acclaim in this idiom as blogging is strictly a meritocracy.