i WAS SO SORRY to hear of the passing of a real Nottingham sporting legend. Les Strongman. Canadian Les, hailing from Winnipeg, Manitoba, joined the inaugural Nottingham Panthers line-up immediately after the war in 1946 and over eleven seasons iced 508 times for the Panthers recording 733 points (402+331). Les also had stints playing in Malmo, Sweden, Zurich, Switzerland and for the Wembley Lions in London. 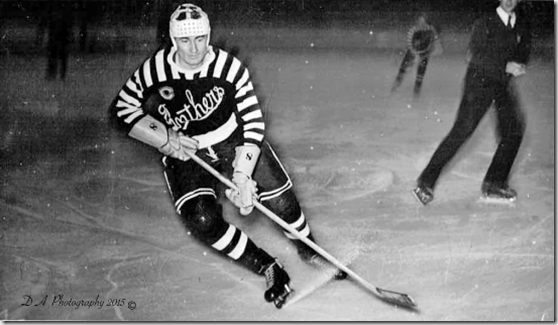 Les Strongman appearing for the Nottingham Panthers 1950/51.
Les was reputedly the first hockey player in the UK to wear a helmet after sustaining a head injury when hitting the boards at Lower Parliament Street

When the club reformed in 1980 after being extinct for twenty years, Les re-joined in a coaching role and latterly coached the younger teams and took a committee role. Many will remember him for his newsagents business opposite the old Nottingham Ice Rink on Lower Parliament Street which he kept for many years. I managed to see him skate in charitable affairs and his coaching role long after retirement. Well into his sixties, his style was remarkable, super smooth and effortless. The left wing also had a laser beam of a shot. The greatness of his youth was still clearly evident.

In addition to being a great gentleman, Les had clearly been a very special player and was often talked about along with his amazing line-mate, fellow Winnipeg native Chick Zamick as centre ice to Les. Together they plundered hundreds of points for the Nottingham team in a wonderful partnership.

After many decades living in the UK, Les decided to re-emigrate back to Canada in his senior years to be closer to his son and daughter. He died peacefully, aged 95 years after a lifetime of achievement. He will be remembered fondly in the city which he chose to call home for so many years.