I was pleased to note a familiar old name being bandied around in Hibs circles yesterday. The name Cropley will be familiar to many Hibs aficionados and also not a few older generation Aston Villa and Arsenal supporters as belonging to the brilliant talent of 1970s’ midfielder Alex Cropley. Alex was one of my great 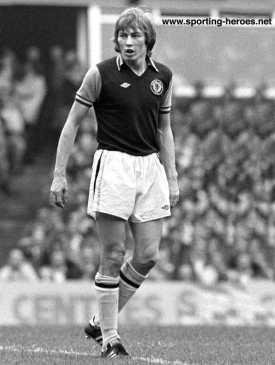 Hibs heroes. In what was a wonderful and creative team shrewdly managed by Hibs boss, Eddie Turnbull in that era, midfielder Cropley shone, even amongst a great array of talent and flair.

Alex Cropley’s game was very much a multi-dimensional one. Not only could he play inch-perfect and flamboyant cross field passes and hold the ball with sublime skill, he could also ‘dig’ pretty well too. His tackling being at the sharp and aggressive end of the spectrum belying his size and neat, deft ball skills. Alex was quite left-footed but what a foot it was.

Alex was born in Aldershot, England being the son of a serviceman stationed in that part of the world. This fact provided his long-time nickname ‘Sodjer’ although he did come to represent Scotland internationally on two occasions. One might look back at the modest two caps and ask how many more times that would have been had he played for Celtic or Rangers instead of Hibs? Nevertheless Alex did have a good career before ending his playing days prematurely at just thirty-one.