Yesterday saw the black and white side of the football divide in Nottingham depart the Football League after a disastrous season. On the final day of the season, Notts required all three points at Swindon Town with the Magpies’ relegation rivals Macclesfield needing to lose at home to Cambridge United. It was a difficult task but one that looked  for a short period into the second half of the games with Notts a goal to the good and Macclesfield trailing by a goal. ‘ It’s the hope that kills you’ as the saying goes though with matters coming to an ignominious end among tears of sorrow among the faithful at the final whistle.

It’s at least good to see that many true football fans can recognise the sadness in the situation of Notts County being relegated from the Football League yesterday. The ending of 130 consecutive years in the League, which they were a founding member of. Notts have been in existence for 157 long years.

Living here, I’ve taken the opportunity to attend Meadow Lane quite regularly this season (and Forest too) and observed this absolutely disastrous season unfold. Most would apportion much of the blame to Chairman, Alan Hardy, a local businessman who bought the club 30 months ago. An attention seeking, somewhat egotistical figure, he has in the past few months presided over not only the demise of Notts County but also his largest company, Paragon, leaving a redundant, unpaid workforce and a trail of creditors including many smaller sub-contractors.

Earlier this year he added to the circus by inadvertently posting a picture of his genitals in a Tweet. Yes, you did read that right, he left his phone’s camera roll on the image he posted. Prior to that he was prosecuted for speeding at 77mph in a 40mph area which he continually griped about in the media and arrogantly appealed against.

Sacking two managers earlier in the season, (the first one widely reported as being allegedly heavily on the sauce) he panicked and sanctioned the signing of several players in January for third Manager, Ardley. The problem is that around 80% of the Manager’s choices did not want to sign for the Magpies due to their perilous position and also because by now many agents refused to deal with Notts due to previous non-payment. 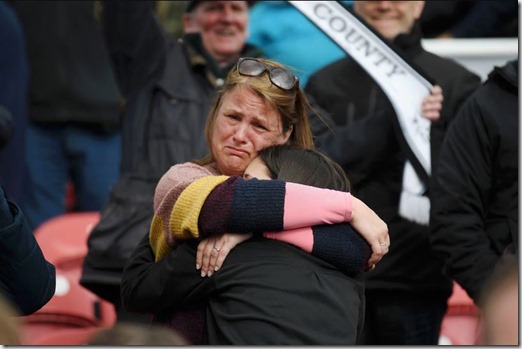 Neil Ardley has struggled with an almost impossible situation since his appointment in November. He’s shown himself to be a good, honourable and decent man though naturally has had much of the blame set on his shoulders. The club’s supporters have been magnificent in their support, turning up in average numbers of 7,300 at home, the third highest in the division.

I’m not a Notts or Forest supporter, I’m 100 per cent Hibs but I enjoy the local teams here doing well and creating a vibrant sporting culture in the city I live in. Notts County meant a great deal to my late mum’s brothers for many years. We know how this works in football, these are the ties that bind, through the generations. I myself was introduced to Nottingham football as a youngster by an uncle who who would kindly take me to both Meadow Lane and Forest’s City Ground on alternate Saturdays. A very varied experience with Notts at the foot of the Fourth Division playing in front of 3,000 fans and Forest challenging at the top of the First Division with regular attendance between 30,000 and 40,000.

At this time there is said to be a takeover in process by a South African consortium. The truth of that is subject to some doubt though. It would not be overly dramatic to say that the whole club’s future lies in the balance. Things will be tough on the field too, there have been some notable successes of teams leaving the Football League and returning stronger, Luton, Lincoln and Mansfield etc. but there are many more that have stayed in obscurity, almost fatally wounded.

Congratulations to Macclesfield on their hard fought survival, they deserved it. I do feel incredibly sad for Notts County’s supporters though after the darkest day in their long history. A little piece of my family background disappeared with it too.